Please help me print my first book of my webcomic!
Visit theflipsidecomic.com

I was flabbergasted to discover that my webcomic hit a new view record! Thanks for everyone who stopped by to check out my big finale!

You can read everything from start to finish on www,theflipsidecomic.com

The Flip Side comic strip as moved to its new home!

I know hitting 100 isn’t a big deal to professional cartoonists, (“You’re just getting started”)but it’s a big deal to me! I didn’t think I would be so dedicated to my silly drawings enough to make it this far. Looking back, I can already see a jump in my draftsmanship with the characters. Maybe it’s because I drew these guys almost 400+ times, maybe it’s just because of my Cintiq I got way back on #73, I don’t know.
So what now? Probably draw up 100 more to print a book I guess!
So I made a New Year’s resolution: To get back to drawing for at least 30 minutes every day. So far, so good.
Long ago, I used to draw a personal comic strip. For about 8 years, I would come up with a daily gag using characters that I had created. I estimate about 2500 pages of drawings/jokes in that time. But the months went on, I had other priorities. I tried to get back into the old routine, but for the longest time, I lost the ability to come up with jokes, gags, snappy phrases and quips.
So without further ado, I present to you: My new comic strip series.
The comic focuses on Murphy, a Sea Lion who befriends a small group of fellow Pinnipeds. The comic generally focuses on Murphy’s daily life with his friends and around their work.

The Cast:
-Valerie (a seal): The cute and attractive love interest. Valerie is a sweet, strong, active, working girl. She’s the waitress at the local beach grill, and a performer at the city’s oceanarium.
-Murphy (a sea lion): The charismatic central character of the series. He’s a hard worker and doesn’t take guff from anyone.
-Trent (an elephant seal): The brash jerk of the group. He is a wild seal, living up the coastline with his “frat house” of other elephant seals. He makes a living as the owner of the grill that the cast hangs out at.
-Wyatt (a walrus): The friendly, dim witted giant. He is a subject at the city’s Marine Biology Research Lab. 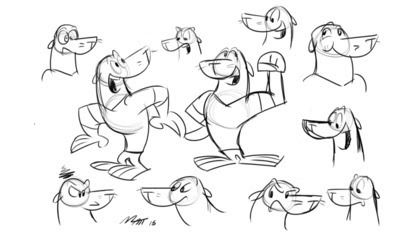 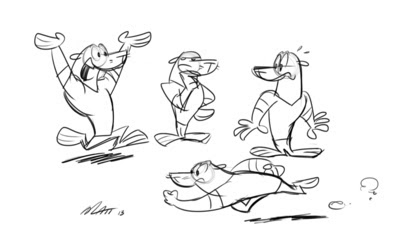 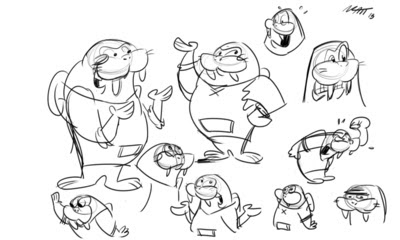 Wyatt sketches
I have quite a few gags written down, so stand by for my latest weekly project.